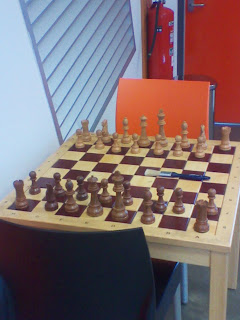 This picture tells a sad story about priorities and cultural decline. In a corner of the mezzanine floor of the local library (or is it a community center now?), pushed up against an air-conditioning vent and adjacent to a fire extinguisher, sits a chess table and chairs. The pieces are set up - albeit that the kings and queens are on the wrong squares (white queen should be on white, black queen on black); and albeit that one pawn and one knight have gone missing! A tradesman has left a small paint brush on the table which nobody has bothered to remove.

When the chess table first appeared a few years ago it occupied a prime site within the library, but I have it on good authority that it was virtually never used.

In itself a trivial matter, but symbolic - and indicative not only of cultural trends but also of the pitfalls of public sector decision-making.