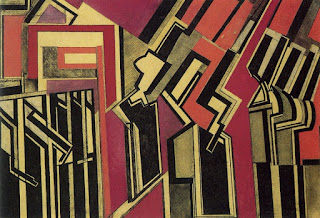 Here is the text of the first post in my Google+ Collection on social and political themes.* [Conservative Tendency continues as usual, but my two new Collections (Social and Political Reflections and Jewish Identity) can be individually followed and so will allow readers to focus on only one or both of these areas as they see fit.]...

What's particularly interesting about the present time is that things seem not just to be changing (and changing rapidly) but changing in potentially fundamental ways.

The old distinctions between the left and right, for example, are becoming increasingly difficult to maintain – or even make sense of.

A lot of rethinking is called for, that's for sure. And such rethinking is what this new Collection is all about. Over time I will post here new pieces (usually brief and informal) of my own, various things I have written in the past (possibly revised, or at least with an explanatory gloss) and links to pieces which I come across.

We need to be skeptical of political ideology, of course. But we can't escape ideology in the more general sense of a value-laden perspective on the world which guides our social and political judgments and actions.

We can, of course – and sometimes we must – just go with our intuitions.

We need, I think, to engage not just with the thoughts of our immediate contemporaries but also with past thinkers. An historical perspective is often crucial in social and political matters.

Recently at The Electric Agora I had a brief and friendly exchange with someone whose political views (judged by the normal standards) are diametrically opposed to mine. The exchange occurred in the comment thread of a piece I wrote entitled Mixing but Not Matching. He described his own disinclination to follow trends and suggested that it was due in part to personality type. Here is the comment I made in response to his:

'I agree that we seem to see many things similarly, and that much of this is a personality thing and also cultural [rather than being based on a particular ideology or a conscious decision]. Not running with the pack isn’t really based on a decision, is it?

I still think there are decisions to be made, however, and also that there are facts of the matter concerning the nature of human psychology and the scope and limits of social behaviour (even if these facts are difficult to describe or apply directly to political or social thinking). Like you, I don’t see this knowledge as necessarily being scientifically-derived in a strict or even a general sense. It can be intuitive to an extent and/or based on historical knowledge.

As you put it, “we piece together our personal, social, and political beliefs out of experience, deep and wide reading, analysis and, in the end, judgments concerning the viability or consistency of differing positions…” '

I don't know that we can do much more – or better – than this.


* The URL is: https://plus.google.com/collection/s3WYTB
Posted by Mark English at 4:15 AM