Jews and Dissenters in England and Wales

A correspondent with Jewish ancestors who lives in East Anglia and has family connections to Wales has provided some fascinating information about the Jewish presence in England and Wales as well as offering speculations about the significance of particular surnames. This is the first of (probably) several posts summarizing the main points of our discussion.

One recurring theme was the possible links between Jews and nonconformists (or dissenters from the established Church of England). My correspondent told of an encounter with a Welsh-born woman who had been raised "chapel" (i.e. as a nonconformist Christian) but who was, in effect, a crypto-Jew. Crypto-Jews were common especially amongst Sephardic populations, but I was surprised that the phenomenon persisted in Great Britain until well into the 20th century. This Welsh woman had been outwardly conforming to the standard (Christian) culture of her environment, but was well aware of her Jewish origins. She recalled that after Sunday school at her chapel, the pastor (who was obviously Jewish himself) had given her extra lessons so that she could "carry the torch" of Jewish lore, religion and identity to the next generation.

It is well-known that some synagogues were built in the Welsh chapel style; but it seems that even some Christian chapels had strong Jewish links.

Some of my ancestors were Pembers. George Hawkins Pember was not a direct ancestor but he came from precisely the same part of England as my Pembers – the cathedral city of Hereford (which is, as it happens, only 16 miles from the Welsh border). G.H. Pember was a theologian and religious author associated with the Plymouth Brethren. A scholar of Hebrew, his focus was on Old Testament prophesies etc.. I suspect that the Pembers were originally Jewish and that the name may derive from the Jewish name, Pemper. This is speculative however.

I am reminded here also of George Eliot's novel, Silas Marner, which I have written about previously. The word 'Jew' isn't mentioned but Silas is depicted as having an alien appearance and he has stereotypically Jewish traits. He is a weaver, and (as I will be discussing in a subsequent post) Jews were strongly associated with the textile business. He doesn't attend church and is totally unfamiliar with the rites and rituals of the Church of England. He is portrayed as belonging not to a specifically Jewish community but to a weird religious sect on the fringes of society. The author later wrote the novel, Daniel Deronda, which explicitly deals with the problems faced by Jews in Victorian times. 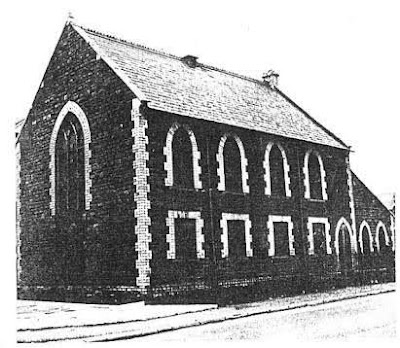