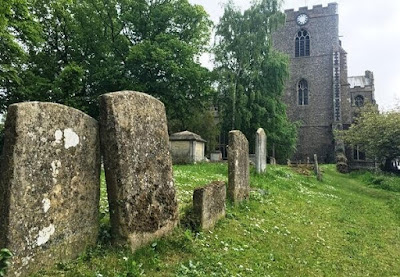 I wrote an earlier post incorporating material from some emails I received from a resident of East Anglia about the Jewish presence in England and Wales which dealt with affinities between dissenters and Jews. That post was mainly about Wales; this one (based on information from the same informant) is focused on East Anglia.

My informant – who has Jewish ancestors himself and whose home town is near the Norfolk/Suffolk border – talked about the demographics of his area, alluding (for example) to former East London families who were resettled there in the 1950s. But his main interest is in long-standing residents of the wider region. Noting the history of towns in the area as wool and cloth trading centres closely tied to the Hanseatic League of northwestern and central Europe, he spoke of “classic medieval Semitic faces” resembling (as he put it) “the church gargoyles which I have always believed to be an early example of anti-Semitism, as are most […] representations of Satan.”

These speculative and impressionistic observations raise interesting questions about the identification of Jews with the demons of conventional religion.

Most forms of anti-Semitism, however, were less extreme, and Jewish stereotypes have varied from place to place and from time to time. The medieval view was different from modern stereotypes. (In the Middle Ages, Jews were normally depicted as having red hair, for example.)

My East Anglian informant notes that historically there was a high proportion of nonconformists (or dissenters) in the local population. Amongst them at one time was my great-great-grandmother, Caroline Sturgeon, who was born in the village of Coney Weston in Suffolk.

Was Sturgeon originally a Jewish name? I suspect so, but my evidence is circumstantial. The fish in question is mainly known as a source of caviar, but the flesh is also eaten. Sturgeon flesh was popular, especially amongst European Jewish communities, despite doubts concerning its kosher status. There was, in fact, a bitter dispute about the fish between orthodox and conservative Jews during the 19th century.

What’s more, some of our Sturgeons had very unusual Old Testament-based given names.

There are still Sturgeons in the area, and Hinderclay church has Sturgeon burials. Winfarthing churchyard was also mentioned as having a lot of Anglo-Jewish names. (“Perhaps as trades people there were sufficient funds to afford the burials skewing the apparent ratio proportions to general population.”)

One reason for the relatively high proportion of nonconformists amongst the local population in past centuries was that the immigration of professional weavers from Flanders and Wallonia was encouraged. They mostly belonged to nonconformist Protestant sects and many would have had Jewish origins. They were known locally as “strangers”. (See the history of Strangers’ Hall in Norwich.)

I referred in my previous post to George Eliot’s novel, Silas Marner: The Weaver of Raveloe. The main character – from the North of England – travels to the Midlands. He is presented as having an alien appearance and as belonging to a dissenting sect. And his mother’s given name was Hephzibah.

Richard Cobbold’s Biography of a Victorian Village was recommended to me. It describes the Suffolk village of Wortham circa 1860 and includes details of each family and their means of living.

According to my informant, most of the shop surnames in his area were English names which are known to be commonly indicative of Jewish origins. (Most of them, he said, appear on a list which I published some time ago.)

Harries was also mentioned as Jewish and Simmonds (which is another name in the East Anglian branch of my family) as probably Jewish.

My correspondent also listed some other names which (he said) might be worth looking at. I haven’t had time to check them yet, but my first thought is that most of these names would probably not have any significant Jewish connections. But I may be wrong. The names are: Bradbury, Bradley, Bush, Clarke, Comer, Flowerdew, Fuller, Hines, Ives, Leeder, Mills, Oakes, Potter, Scoggins, Strudwick, Ward and Wright. Also mentioned were three other bird names: Drake, Gosling and Nightingale.

If you have any thoughts on any of this, please don’t hesitate to comment or send an email (engmar3 at gmail dot com).
Posted by Mark English at 1:00 AM No comments: