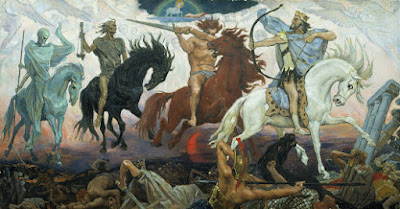 Saul of Tarsus, later known as Paul, had been involved with a mystical form of Judaism (possibly Merkabah) before he joined the early-first-century Jewish sect which became (largely through his own writings and missionary activities) a new religion quite distinct from Judaism. Paul knew that his teachings were unacceptable to most devout Jews and would be perceived as utter foolishness by most non-Jews, especially by those educated in classical culture. The Mediterranean world was dominated by the Roman Empire; Koine Greek was the main language of international trade and culture. Paul, as a practising Jew, a Roman citizen and a speaker of Greek, understood – and unequivocally rejected – both classical values and the tribal aspect of Judaism. Arguably, more than any other single figure, he universalized and so cut loose from its ethnic moorings the radical political morality which had become a significant feature of the Judaism of the time.

Though Christianity is now in rapid decline, secularized versions of Biblical ethics and eschatology still flourish and continue to exert a profound influence on moral and political thinking, especially in left-wing and radical circles. Unfortunately these modes of thinking become very problematic if you remove them from the theological context in which they arose. The moral imperatives of the Biblical and Christian world cannot be divorced from the absolute and morally engaged deity who lies at the heart of most Biblical texts without creating major distortions.

What gives force to notions of moral responsibility which go beyond our natural instincts and the requirements of social life? If there is a morally engaged creator-God involved, a God who communicates with us and cares about us, an absolute and demanding Biblical-style morality makes sense. If not, not.

On the Christian view, we are called to feel in some sense responsible for and to truly care about everybody on the planet. And this may be psychologically possible – if one believes in prayer and providence and a beneficent deity.

If you take these radical moral imperatives seriously in the absence of religious belief, however, they create an absolutely crushing and debilitating psychological burden. It is a recipe for cognitive dissonance and worse. Self-protective moral contortions and distortions, compartmentalized thinking, cynicism and hypocrisy are not restricted to the atheistic left but such cognitive and moral aberrations are certainly in evidence in contemporary progressive circles. What’s more, in the absence of actual religion, social and political causes have a tendency to become cults, or at least vehicles for cultish or tribalistic behavior. Activist groups typically involve a strong in-group/out-group dynamic.

Moreover, there is a demonstrable link between radical Western social and political thought and Biblical ethics.

Thinkers with a Jewish background (amongst them Heinrich Heine, Alexander Herzen, Karl Marx, Eduard Bernstein, Rosa Luxemburg, Leon Trotsky, Max Horkheimer, Herbert Marcuse, Theodor W. Adorno, Saul Alinsky and Noam Chomsky) have been prominent proponents of radical ideas within the Western tradition, especially over the last two hundred years. It would be naive to attribute their prominence solely to a shared, secularized religious culture. Much can be explained in terms of social and economic history. But it is not unreasonable to see many of these thinkers as having being influenced, directly or indirectly, by the radical morality implicit in certain books of the Hebrew Bible as well as by a sense of belonging to a group with a long history of persecution and resistance.

Many Christian radicals also took their cue from the Bible, of course. Over the centuries, anti-establishment Christian thinkers of all kinds have found inspiration for religious reform and radical politics in both the New and Old Testaments. The New Testament draws heavily on the prophetic and apocalyptic literature of postexilic Judaism. Revelation, the final book of the New Testament, is just one of many apocalyptic texts, the vast majority of which were associated not with Christianity but with Judaism. Perhaps the most influential of these was the the Book of Daniel, composed in the second century B.C..

Despite attempts by later thinkers to Christianize them, mainstream classical values stand opposed in quite fundamental ways to the uncompromising moral spirit of the prophetic literature and the New Testament. The contrast between mainstream Greek and Roman philosophy (with its emphasis on reason and moderation) and the apocalyptic literature (with its emphasis on revelation and its often extreme and violent imagery) is even greater.

Many points of difference could be enumerated between the moral attitudes which are evident in these various traditions. The contrasts, however, are not just between Roman and Jewish or Pagan and Christian, but also between specific strands of Judaism or Christianity or Pagan philosophy. The New Testament narratives and other documents of the time make it clear, for example, that not all Jewish religious groups were committed to the values and beliefs of the apocalyptic and prophetic writings. And there were also many assimilated Jews (like Josephus) who took a basically pro-Roman stance.

Nonetheless, the contrast between the early Christian view and the classical view is pretty clear. Drawing on certain strands of Jewish thought, the Christian tradition defined morality or ethics in narrower terms than the classical philosophers. Prudential considerations were excluded (thus the emphasis on self-sacrifice and martyrdom). And moral considerations (in this narrow sense) trump all other kinds of consideration. Also, the Christian view is that we have a direct responsibility not just for our family members, friends and neighbours, but for everybody. My main point is that this style of ethics evolved within the context of a particular system of religious beliefs and, divorced from such a context, it is neither logically compelling nor (and I am speaking from personal experience here) psychologically bearable.

To summarize: I am saying that Western culture has inherited (at least) two very different – and incompatible – ways of conceptualizing and judging human behavior, and that the form peculiar to certain Hebrew and Christian texts in which commonsense and prudential considerations are marginalized or excluded altogether, is only sustainable within a religious framework of some kind. Furthermore, I am suggesting that, in many cases, traces of Biblical morality mark the thinking of people who see themselves as being non-religious and quite unaffected by the Biblical traditions of which I am speaking. This applies particularly in the sphere of radical politics.

I mentioned tribalism. As I see it, we are inveterately tribal creatures, but our tribalism may express itself in different ways. Traditionally it was associated with actual tribes and clans. But the radical moral views of the New Testament led to a tribalism of ideas, beliefs and values totally unconnected with – and in fact inimical to – family and clan loyalties. Radical forms of socialism clearly inherit such notions.

Finally, a brief mention of a couple of specific concepts which are are associated (mainly) with progressivism and the left and which also bear the marks of their religious origins: social justice and human rights.

The rhetoric of social justice has Christian roots but it was also a focus of much secular activism during the 20th century and beyond. In the 1930s the demagogic Charles Coughlin probably did more than anyone else in the United States to popularize the term. But, for him, the concept was still essentially a religious one in the sense that the moral imperatives involved had a religious basis. Remove that basis and you change the concept entirely.

The concept of human rights (taken from the natural law tradition rather than Biblical sources) is also a staple of today’s radical progressivism. Activists find the rhetoric of human rights extremely useful in pursuing their political goals. Few however have any interest in or commitment to the underlying metaphysics. Again, the result is unfortunate: conceptual confusion and a loss of meaning and coherence. As rights inflation has inexorably taken hold, the emptiness and absurdity of many of the claims being made becomes increasingly evident.

[This is a slightly revised version of an essay published at The Electric Agora.]
Posted by Mark English at 3:39 AM No comments: