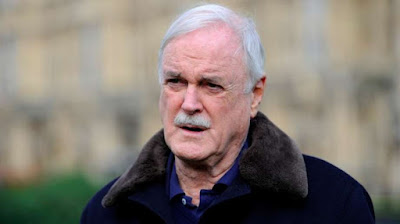 I once claimed that all the best people are dead. Such an assertion, taken at face value, is little more than a rhetorical flourish or provocation. Just a little hyperbolic, you could say.

Compare and contrast the stated views of John Cleese. Informed by an interviewer in September, 2017 that he (Cleese) was “very, very old”, the actor responded:

I’m 77. It’s very nice being this old, because when you’re this old, you’re going to die soon, so you don’t give a [expletive removed in source]… I am not afraid of death. I was thinking about it a lot, because you do when you’re older. I thought: most of the best people are dead.

I have to admit that his “most” is more defensible than my “all”. Cleese added that there are today “a lot of really awful people” about, many of them holding positions of power and influence. Provocation? Yes. But at least half-serious also.

If we are to take such claims even half seriously, however, we need to see them clearly for what they are: judgments not so much about individuals but rather (because individuals are created by the culture which nurtures them) about cultural change.

Moreover, negative or positive assessments of our (or any) society’s cultural trajectory will inevitably be subjective because any given judgment derives from a particular value framework, one amongst many actual and possible such frameworks. And, although they may be objectively described, competing value frameworks cannot be objectively assessed (except perhaps in very broad, functional terms).

Given the assumption that the social, political, educational, professional and familial structures upon which the functioning, health and transmission of a valued culture depend are breaking down or mutating in dangerous or otherwise undesirable ways, negative conclusions about the present and immediate future can be confidently – and quite reasonably – drawn. How plausible (or implausible) such an assumption or set of assumptions might be is debatable, of course. Opinions on these matters will be heavily influenced by ideological views and moral priorities.

Documentation on the decline in educational standards and a concomitant loss of status on the part of teachers and academics is not difficult to find, however. Likewise documentation on the breakdown of the family. But interpretations of the data will inevitably differ, as will the scope and focus of individual concerns.

We are all confronted with – and react in different ways to – the same broad social, political and cultural realities. Strangely – or perhaps, given the binary nature of many of our thought processes, not so strangely – most of us take a clear position not just on particular issues but also on the general trend. It is perceived as positive or as negative; as indicative of general improvement or of general deterioration.

Driven by temperament and who-knows-what, as time passes and as more loved and admired figures topple into the grave, I naturally see my negative stance confirmed. It is not just that all the old family friends, my father, all but one of my aunts and most of my teachers are dead; so are the thinkers and writers and artists who mean most to me. More importantly, the sorts of values these people exemplified or at least aspired to have been replaced by other values entirely.

Because linguistic communication is based on shared assumptions and words have no fixed meanings, talk about alternative assumptions is difficult. Let me try at least to describe the main areas in which I see deep divisions.

One is the social and political arena. So-called progressive attitudes and policies clearly dominate within the education system and within our ever-expanding government and quasi-governmental bureaucracies. Such attitudes also dominate the mainstream media and the increasingly influential technology companies. ‘Conservatism’ has become a dirty word associated either with fundamentalist Christians or war-mongering neocons. Burkean and other sensible and moderate forms of conservatism are not much discussed or widely understood.

Unfortunately, the arts have become a vehicle for the dominant ideology. There is an appalling homogeneity of views amongst actors, directors, screenwriters, dramatists and artists of various kinds. I know a bit about Western cultural history and I have never seen anything like it.

There are, of course, a few dissidents, a few independent voices, but even they find themselves caught up in the general silliness. Satire works only when the basic culture is still more or less intact. It deals with aberrations, exaggerating certain trends. But our politicians, bureaucrats, actors, academics and educators unwittingly satirize themselves.


[This is an extract from a piece published last month at The Electric Agora.]
Posted by Mark English at 3:33 AM