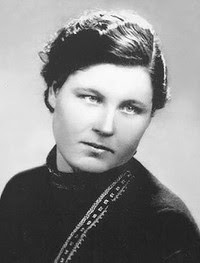 This is not really my thing, but it's a nice photo, and I am, as it happens, a great reader of obituaries, especially of people who lived long lives.

Though there is a strong genetic component in longevity, other factors cannot be ignored.

You would think that living through years of desperate poverty and war and chaos and grueling work would take its toll. But it seems that, in many cases, (involuntary) caloric restriction, physical activity and self-discipline may have proved more significant in the end than exposure to what we would now characterize as serious occupational and other health and safety hazards.


Those many ordinary and yet extraordinary people who survived the horrors of World War 2 in Europe are slowly disappearing. Many, of course, emigrated and have lived out the greater part of their lives in the USA, Canada, South America or Australia.


"... She was 28 years old in 1944 when her family fled their farm [in Latvia] to walk to the Baltic Sea to escape the [...] Red Army. Her older brother and sister, mother and sickly father embarked on the journey, leaving most of their possessions. Helen's father died in her arms near the Baltic coast in a smokehouse where a fisherman let them shelter. Despite the previous two refugee ships to leave the Baltic port of Liepaja being torpedoed by Soviet submarines, Helen's ship made it through. The next stage was a work camp in Nazi Germany. For the next five years they worked seven days a week, slept on concrete and were always hungry.

Helen was home-educated – she never went to a day of school – yet was fluent in reading and writing in three languages. She was indefatigable from the farm as a child to old age ...

While in Berlin she worked in a chemical factory for six days a week and cleaned windows on Sundays for a jar of jam. At one stage she obtained a bicycle and read tarot cards for surrounding farmers. When she correctly predicted a wife would learn the fate of her soldier husband on her return home, demand escalated. She also set up shop in a basement cleaning and smoking fish..."