A new Collection on Jewish themes 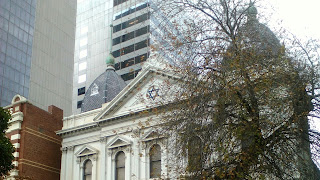 I am setting up a couple of Collections on Google+, one titled Social and Political Reflections, and the other titled Jewish Identity. These Collections are not intended to replace Conservative Tendency which will continue to operate as normal.

Here is the text of something I posted today direct to Jewish Identity*:

I want to explain what is driving my interest in Jewish identity, history etc..

Ethnic identity is a very vague and often slippery concept. Some people have a relatively clear and simple connection with a single ethnic group but most of us have a lot of flexibility in terms of how we can choose to see or define ourselves in ethnic terms. I am not Jewish but, as so many of the thinkers and writers and filmmakers who have influenced me were Jewish, I have long felt a certain cultural affinity with Jews.

Consequently it came as a pleasant surprise for me to realize a few years ago that a good many of my ancestors were in fact Jews. (I won't try to quantify the proportion: smallish but not insignificant, I would say.)

There are, then, genetic links; moreover it is even possible that certain cultural peculiarities and preoccupations within my father's family were built on forgotten memories. This would be in addition, of course, to the strong – and quite pervasive – historical and religious Hebraic influences on the wider culture.

At any rate, certain family matters now seem to make more sense to me than they did in the past; I only regret that my father died before these things began to fall into place in my mind and I began to take an interest in them.

It took a while for the penny to drop because, at first glance, all my ancestors appear to be boringly British, certainly since about 1800.

I came to learn, however, that some of the names of my recent ancestors, though seemingly British, can indicate Jewish origins, and putting this together with family stories about ancestors coming from France and other clues suggested that a number of lines on my father's side trace back to Jewish communities on the Continent.

In some sections of my family tree, there are small clusters of obviously Jewish names mixed in with the Anglo-Saxon or Norman. My guess is that such patterns would be quite common for people of English ancestry and that similar considerations would apply in respect of many other European peoples.

Of course, some long-established English families have names which indicate Jewish origins, but origins so distant as to be virtually irrelevant from a personal or genetic relatedness (at least in terms of autosomal DNA) point of view. Such families have been Christian for centuries and intermarried with non-Jewish families and so are not in any meaningful sense Jewish. 'Moyse' [deriving from the French form of Moses] is an example from my own family history. The name in our case appears to trace back to a particular merchant (presumably Jewish) associated with a very old building near the centre of an English market town. But, as I say, this was so long ago it is insignificant from a genetic (autosomal DNA) relatedness point of view even if it is an important reminder that Jews have been an integral part of English (as of general European) culture for hundreds of years.

At the moment I am particularly interested in finding out more about the relatively undocumented waves of immigration into Britain which occurred during 17th and 18th centuries.

I have Irish as well as English ancestors, but these lines are less suggestive of a significant Jewish element. There are a couple of interesting Irish possibilities but (as with the English examples) I won't go into detail here.

My intention is gradually to bring together in this recently-opened Google+ Collection my old posts (possibly revised and updated) on Jewish themes, some new posts and external links. We'll see how it goes anyway...


*https://plus.google.com/collection/IrvUTB
Posted by Mark English at 1:31 AM