[Just up on my Google+ Collection, Social and Political Reflections...]

Political and financial predictions are notoriously – and necessarily – unreliable, but we often have to make them and act on them. This is especially so for those who depend on investments for a large part – or all – of their income.

Predictions about the direction of stock market indices, property prices, interest rates, etc. are much harder to get right than predictions about the outcomes of elections or referenda. The former (like typical referenda and many elections) may involve a simple binary choice but – unlike elections and referenda – they are not tied to a timetable. So bubbles and other market distortions can persist for long periods of time. Timing is crucial for investment, but the best one can hope for in this regard is to get one's timing approximately right. [1]

Political risk is one of the things that makes financial predictions so problematic – and we are seeing a lot of it about these days.

Politics, one might say, is an unfortunate necessity. [2] Really, it's just about – or should be about – the boring business of organizing an institutional and legislative framework which allows large numbers of people to live together in a reasonably cooperative way. But it's also a very human thing, being utterly dependent on basic human attitudes, especially trust: trust in one another, and trust in the powers that be.

Recent events have amply demonstrated that both the US establishment and the EU establishment have lost the trust of (a majority of) the people. Add to that social divisions – the result of economic hardship and cultural changes (arguably compounded in some jurisdictions by large-scale immigration) – and you have a recipe for trouble. [3]

[1] I have been expecting a bear market in stocks for more than two years now. It may finally be upon us. But I have been dead wrong about Treasury bills and bonds, etc. (yields just keep dropping!). I know there is supposed to be an inverse relationship between stock and bond prices but (like many others) I see a bubble in both.

[2] The phrase is in my mind because a short commentary of mine on a fascinating episode of an old Canadian television panel discussion series is about to appear at The Electric Agora. The main question the panel addressed was: Is spying an unfortunate necessity?

[3] I know the immigration issue is a sensitive one, and there is a lot of xenophobia about, but it is wrong to accuse everyone who questions the wisdom of large-scale immigration of bigotry or racism. This is part of the problem, in fact. Many years ago Enoch Powell was forced out of British politics when he argued strongly against his country's immigration policies. The subject was taboo and it still is in certain circles. Why can't we just talk sensibly about these things? 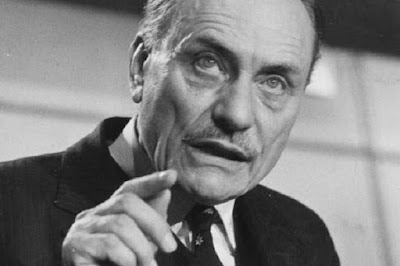