The tiger in the window

I have now begun a third Collection on Google Plus, called Language, Logic, Life.* No more are planned.

The new site has a similar name to my other blog but is not intended to replace it. 'Language, Life and Logic' is a play on the title of A.J. Ayer's account of the philosophy of the Vienna Circle and the blog has a more or less philosophical focus. The title of the new site lacks this oblique reference to Ayer, and logic is deemphasized slightly, with 'life' getting the more significant final slot. In other words, the new Collection is intended to be slightly more open than LL&L and will include lighter material as well as more serious stuff.

My latest post there illustrates the lighter side: just a snap and few words of commentary. As follows... 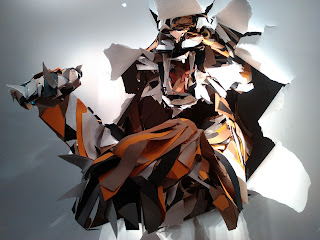 A striking Hermès window display (Collins Street, Melbourne)... I had thought that 'paper tiger' was a long-established English expression, but it seems that its use in English (and French as 'tigre de papier') only dates from relatively recent times – prompted mainly by its use in speeches by the Chinese revolutionary leader Mao Zedong. It is a phrase which has very deep roots in traditional Chinese culture.