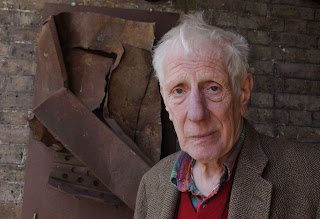 I said I might follow up on Jonathan Miller, having posted a couple of weeks ago a segment of an old TV interview in which he talked about his Jewishness. There he was basically saying that he asserts it only in the face of anti-Semitism, and also that he was not religiously Jewish. (Apparently, he gave up on the religious side of things as he was preparing for his bar mitzvah, which in the end never took place).

When he was interviewed by Ben Silverstone in 2006, Miller was saying the same things about his Jewishness as he had been a quarter of a century earlier. But it's clear that he had become more embittered over the intervening years, convinced that he had not been given his due (as a director, say) as well as exhibiting more regrets about giving up the practice of medicine.

A number of things struck me, most notably his commitment to the ideas (mainly his views on religion and social issues, I suspect) of Bertrand Russell. Miller's father (who later became a noted psychiatrist) had studied philosophy at Cambridge before World War I and Jonathan inherited his father's library which included works by Russell.

Miller -- I think unfortunately -- made a bigger deal than Russell did of rejecting religion. For Russell this was primarily a personal decision whereas Miller sees religion as an evil social force which must be actively resisted.

I am also out of sympathy with Miller's left-wing social and political views. His children were sent to the local comprehensive, described by his son as a "war zone".

Russell had some decidedly dodgy ideas on education, and made (or lent his name to) some extreme political statements, particularly in his old age as a leading member of the Campaign for Nuclear Disarmament and associated groups. But generally I think his social and political views were more nuanced than Miller's.

I won't talk about Miller's activism on behalf of the Palestinians and against Israel. I have never lived in the region and I prefer to steer clear of these sorts of discussions. Both sides have done bad things.

In three main respects I am on the same page as Miller: I share his respect for scientific knowledge and achievement, his rejection of metaphysics, and his fascination with ordinary human behaviour.

Miller says: "On the whole, the best works of literature simply address the tiny, quotidian questions - what happens when you get up? What stops you not going to bed earlier? In neurology, you’re also looking at the peculiar, anomalous ways in which patients do what they do: deficits, failures to say what they wished to say. In both neurology and theatre, subtle observation of what appear to be negligible details turns out to be the name of the game: that’s where the payload is."

I agree. Certainly there is no way we can get answers to those old, traditional metaphysical questions about purpose and meaning. The best we can do is muddle through, understanding the little we can and cherishing, if possible, the uncertainty and fragility of human life.

At the time of the interview, Miller was directing a production (in Michael Frayne's strange but wonderful translation) of Chekhov's The Cherry Orchard.

Chekhov, he points out, was a doctor also. Miller also mentions Flaubert in this regard (but not Somerset Maugham who -- though he too was trained as a physician and was an acute observer of mundane human behaviour -- was probably not ideologically sound from Miller's point of view, being rather conservative). Frankly, I think medical training is much less relevant to observational capacities than Miller is making out.

According to Miller, great literature is simply about "what it's like to get from one end of a life to another". This sounds about right. Seriousness and triviality are inevitably intertwined.

The Cherry Orchard, Miller explains, "ends with a short scene depicting the aged footman, Firs, locked into a freezing house, left alone, apparently to die, after the departure of the entire Gayev household for the winter."

“My life’s gone by, and it’s just as if I’d never lived at all. I’ll lie down for a bit, then… No strength, have you? Nothing left. Nothing… Oh you… sillybilly…”﻿
Posted by Mark English at 6:07 PM