Geopolitics and the US presidential election

"Could fear of Trump rattle Stoics, while fear of death finds no purchase?”

Dwayne Holmes was alluding to self-styled Stoic Massimo Pigliucci's readiness – in the face of the possibility of a Trump presidency – to endorse over-the-top, emotion-driven political analysis. There is certainly a lot of panic in liberal and progressive circles.

Here Holmes summarizes his own take on the upcoming election:

“We are down to haggling over whether it is a moderate pro-business southern Democrat (aka conservative) or extreme right wing ... reality TV star [and] pro-business conservative who sits in the office. Both are hawks (with Trump more blustery but less hawkish) …”

He is right in that Trump is certainly less hawkish in terms of foreign policy. Trump is not a neocon.

On the issue of conservatism and the left/right divide you’d have to say that these terms are getting more difficult to apply in the normal way. This is partly because across the Western world a lot of people – including many traditional conservatives, classical liberals and previously apolitical folk – are becoming disgusted with the status quo and so are voting or threatening to vote for candidates outside the mainstream or otherwise in quite radical ways (e.g. Brexit).

Hillary Rodham was a keen Goldwater supporter before she went to Wellesley College and was introduced to left-wing thought. She wrote her senior thesis on Saul Alinsky. But she certainly seems to have moved away from Alinsky’s ideas (apart perhaps from his ideas on lying). She is a neocon and supported by neocons. But many conservatives now clearly hate the neocons and are strenuously resisting their foreign policy prescriptions.

Why is it that President Dwight D. Eisenhower's prescient warnings about the American military-industrial complex (often now conceptualized in terms of the broader concept of the deep state) are only now becoming mainstream in conservative circles? The reasons are complex but certain things stand out.

For one thing, the recent track record of American interventions has been quite disastrous. But, more importantly, associated with these failures has been a loss of confidence in America's future prospects in terms both of prosperity and (partly as a consequence of this) of geo-strategic power. The centre of gravity of the world's wealth is reverting to a more normal historical pattern, balanced between the Eastern and Western hemispheres. There even seems a real prospect that the West is entering a period not just of relative decline in economic and social terms but of actual decline. And, of course, those overseeing this difficult period – the promoters and implementors of recent and current financial, monetary and foreign policies in the West – have lost or are rapidly losing credibility.

My main concerns regarding this election are geopolitical. Clinton’s general foreign policy orientation (and she has form on this front, remember) strikes me as a greater danger to world peace than Trump’s.

And if she has serious health problems (as appears increasingly likely), that would only add to the danger/instability. I could easily imagine a situation in which, if her health holds out until the election and there are no more ill-timed coughing fits or physical stumblings and she manages to get elected, that she would be not be at all inclined to step aside in favour of the Vice-President even in the face of very serious health concerns.

There is at least one precedent of this happening in America: Woodrow Wilson had a severe stroke and stayed in office. And there have been many cases in other countries. Some occurred in the old Soviet Union. There was, for example, Leonid Brezhnev who had severe arteriosclerosis which affected his speech and other aspects of neurological functioning. His immediate successors were almost as bad but didn't take so long to die.

And then, of course, there was the sad case of the bloated-looking and alcohol-fuelled Boris Yeltsin in post-Soviet Russia.

Clinton would be more Brezhnev than Yeltsin, you'd have to say. 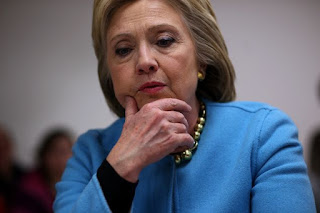