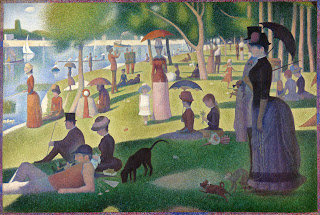 Something unusual, something historically significant is going on.

Epochal shifts do occur in history, but they usually only become clear in retrospect. One of my professors had a large print of Seurat's "A Sunday Afternoon on the Island of La Grande Jatte" hanging in his study. It is emblematic of a period (between 1871 and 1914) which came to be known as la belle époque, a time of prosperity and peace and scientific and technological advancement which preceded the horrors of the Great War. Never again would such naïve, unclouded optimism prevail.

Some would say that the post-World War 2 world was such a period. And, perhaps surprisingly in view of the threat of a world-destroying nuclear conflict, there was during those years both optimism and rising prosperity. This time it was not military conflict which broke the spell, however, but rather deep underlying economic and social problems which have only slowly become evident.

I want to focus on two indicators, one economic and one social: the first quantitative, the second qualitative.

The quantitative indicator I am referring to relates to debt-levels, especially government and household debt; boring, I know, but extremely important and relatively easy to grasp. The qualitative indicator relates to levels of trust between different societal groupings and individuals and their relationship to freedom, morality and social cohesion.

Internationally, sovereign debt is at historically very high, if not unprecedented, levels. In the U.S., the national debt currently stands at 20 trillion dollars, or about 100% of GDP. Household debt is also very high, having returned to the levels which preceded the 2008 crisis. Total U.S. debt (public and private) stands currently at about 350% of GDP.

The situation is quite obviously precarious, not least because a continuance of the status quo is dependent on the very low interest rates which the coordinated activity of central banks has engineered. But central banks don't have complete control of interest rates. Longer dated government bonds (seen as indicators of expected inflation, and also as a bellwether of commercial interest rates) will eventually rise, putting severe pressure on highly indebted governments and other borrowers.

Another way of seeing the problem is in terms of the relationship between economic growth and borrowing. Basically, for the last forty years or so, growth has been dependent on increasing levels of borrowing. For the last nine years, loose monetary policy, which has allowed rapidly increasing debt levels, may have forestalled a worldwide recession, but only anaemic growth rates have been achieved. The consequences should be obvious to anyone who thinks about it. There are limits to what borrowing can achieve, and responsible planners realize that levels of sovereign debt are unsustainably high.

In the case of the United States and many other Western countries, the looming problem of unfunded liabilities – especially relating to pensions and social security programs – dwarfs official national debt figures. These promises can never be delivered on, but admitting this would have a high political cost.

There are only two ways out in the longer term: default, or inflating away the debt/liabilities (by money printing). I don't know what the consequences of default (on sovereign debt, say) would be – not good, obviously – but the inflation road is also a dangerous one. Inflation, once it takes hold, is notoriously difficult to contain. Moreover, the sorts of anti-inflationary policies which have succeeded in the past may not be politically possible today.

Already, Western (and Eastern) economies seem to be stalling. Highly indebted households in the U.S. are cutting back on discretionary spending. The endgame – probably beginning with a deflationary crisis which would lead to widespread defaults – may well be approaching. I hope it is, because the longer this debt-based charade continues, the more serious the consequences will be.

No individual or country has a right to a certain standard of living, even if people living in rich countries all too often assume that they do. But, not only can continuing prosperity not be guaranteed, poverty is already with us – even in the still relatively prosperous West. Look at the youth unemployment levels in many European countries, for example. Or the stresses being faced by middle- and lower-income families in America and elsewhere. Or the bleak prospects facing many (most?) retirees.

The loose monetary policies pursued by central banks has had the (presumably unintended) consequence of enriching the few at the expense of the many, as the prices of financial assets and certain categories of real estate have been disproportionately inflated.

Moreover our collective memory of the two World Wars and the Great Depression is now fading. Such knowledge as we have of these times is based more on reading and films than on actual memories or family stories. Having grown up (in the West) during a time of peace and prosperity we might be tempted to assume that what we have experienced is the norm, to see war and poverty as some kind of aberration. But history teaches us otherwise.

Even the years immediately after World War 2 were very tough, especially in Europe. Many areas – including Britain, France, Germany and Scandinavia – were in dire financial straits. The material standard of living was much lower than it is today.

Who is to say, then, that our present levels of prosperity will persist? Why should they? Debt levels strongly suggest that we are living beyond our collective means and have been for some time.

So perhaps the question should be: how can present levels of prosperity persist, given the fact that we have been increasingly dependent on credit and deficit spending by governments to fund our lifestyles?

I will address the (qualitative) question of trust and social cohesion another time.
Posted by Mark English at 1:24 AM