This is an abridged version of an essay of mine which appeared recently at The Electric Agora. 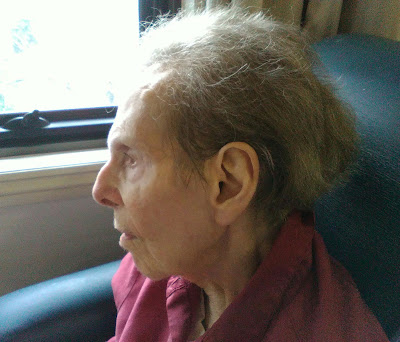 It's well-known that music can play a positive role in dealing with such conditions as Parkinson's disease and depression.

My mother has been struggling with a range of medical problems (including Parkinson's disease, severe depression and dementia) for some time. She has lived in a care home for six years now. Her concentration span is limited and she finds speaking increasingly difficult. But music remains important to her. She had some early classical training on the piano but her main passions as a young person – apart from movies – were dancing and pre-rock-and-roll American popular music.

When I visit her, mostly in the evening, there is not a lot of talk, no dancing, and no television (apart from ten or fifteen minutes of news). Music is the main entertainment. I play recordings which I know she likes mixed in with others which I think she might like: a bit of classical piano music (Mozart's sonata K. 331 is a favorite), but mainly popular songs. Certain themes and moods (e.g. love, loyalty, steadfastness, defiance) and certain styles and tempi (simple and slow) tend to resonate.

My mother is a fighter. She has been written off many times by medical professionals over the years but has always managed to rally and come back from the brink. It’s sheer determination that keeps her going. The topic of funeral arrangements came up recently. I told her not to think about it; my brother and I would deal with any arrangements. Then she said she wanted me to arrange things (as she put it) “so that I don’t die.” I said I would do my best.

Not surprisingly the Puccini aria “Nessun dorma”, which ends with that marvellously defiant “vincerò” (“I will prevail”), works for her – the Mario Lanza version, at any rate.

We know we won’t prevail in the end. Though battles are won, we are fated to lose the war. We live as if this were not the case; as if victory were possible. But love and loyalty exist, and this fact stands between us and dark despair.

Generally I choose less emotionally extreme pieces than “Nessun dorma” – popular love songs, the sort of music you could dance to, ballroom-style, certain forms of jazz.

George and Ira Gershwin's “Love is Here to Stay”, as sung by Gene Kelly, is simple, straightforward and reassuring.

Results can be unexpected. Happy songs – especially if they are known and remembered – don’t always have the desired effect. "On the Sunny Side of the Street", a song my mother used to sing, once brought on a crying episode.

By contrast, “My Funny Valentine” (early Frank Sinatra version) always gets a good response. Another old Sinatra song which she responds well to is “Nancy (with the laughing face)."

Another favorite is (the long version of) “These Foolish Things”, as performed by Jane Birkin and Jimmy Rowles. Philip Larkin, the English writer and jazz-lover, thought the song a bit too self-consciously poetic, but he liked it nonetheless (at least as performed by Billie Holiday). Part of what gives the song its strength for me is that it involves real memories of a real love affair.

The lyricist was Eric Maschwitz, an Englishman who became involved with the Chinese-American film actress, Anna May Wong. Some of the memories sound like romantic clichés, but many are believably specific: a cigarette with traces of lipstick; airline tickets to romantic places; a tinkling piano in the next apartment; a telephone left ringing; first daffodils; long excited cables [telegrams were charged by the word and could be quite expensive]; the sigh of midnight trains in empty stations; gardenia perfume lingering on a pillow; silk stockings; wild strawberries (“only seven francs a kilo”); Greta Garbo’s smile; a waiter whistling as the last bar closes; the scent of smouldering leaves; the wail of steamers...

Not being a musician, and being very language-oriented, I tend to see the lyrics as primary. The music is the setting. It enhances the words (or not, as the case may be).

I can’t say exactly how my mother perceives these songs, but I know that the cultural world in which she grew up – dominated by Hollywood and British movies and the popular songs of the time constitute a significant part of – and color much of the rest of – her memory base. The sense of outrage and loss she felt as a teenager when her mother found and disposed of a box of cuttings and photographs from movie magazines (like Film Fun) which she had hidden in her room stayed with her for years.

Once when she was in hospital a few years ago during a bout of pneumonia and very close to death, she said that she had been visited by Eddie Cantor. We thought she was hallucinating – until we encountered a young psychiatrist who had been assigned to her. He had very thick rimless glasses which made his eyes look prominent.

Even now memories of movies and actors and singers and dancers from that period are still active for her – singers like Frank Sinatra and Dinah Shore, for example. She had a crush on Tyrone Power, and had a special interest in French actors working in Hollywood: Annabella (who was married to Tyrone Power), Simone Simon, Michèle Morgan and – her two favorite Frenchmen – Charles Boyer and Jean Gabin.

French songs or singers were generally not so familiar to her. But Blossom Dearie's version of “Plus je t'embrasse” typifies the ideal kind of song for my Parkinson’s playlist. It’s light and bright and jazzy. This kind of music – like the music of Mozart – conveys a reassuring sense of equanimity and provides a bulwark of sorts against the waves of depression and anxiety that are commonly associated with the condition.

Perhaps my mother’s favorite song is “Someone to Watch Over Me” by George and Ira Gershwin. Blossom Dearie’s interpretation is perfect, and certainly more convincing than the Frank Sinatra version which my mother remembers. Somehow it’s a bit of a stretch to see Sinatra, even in his young and skinny days, as "a little lamb who's lost in the wood."
Posted by Mark English at 4:33 PM