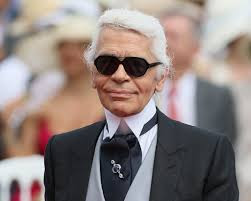 Here is a short extract from a piece I wrote early this year:

Variations on the general theme that things ain’t what they used to be are often heard but rarely taken seriously. And, as a general rule, the older the speaker is, the less seriously the claims are taken. Of course he would say that, the old codger. Life was so much better for him back then.

A couple of years ago the German-born fashion designer Karl Lagerfeld admitted to feeling that the world he had once lived in had ceased to exist. Paris, where he has lived and worked since the 1950s (when “it looked like an old French movie”), had never been as gloomy, dangerous or depressing as it was now.

As fate would have it, Mr Lagerfeld himself ceased to exist two weeks after my piece appeared. He was hospitalized on February 18th and died from complications associated with pancreatic cancer the next morning. In accordance with his wishes, there was no formal funeral, no ceremony.

My attitude to the industry in which Lagerfeld worked is not positive, and I have little knowledge of or interest in the man himself. What is most interesting is the phenomenon, the artifice, the public image – sustained over many years – as a kind of mask or act which was understood to be just that. Whatever his faults, Karl Lagerfeld had style and staying power. He also maintained a sense of privacy, showing himself to be (in this respect at least) very much a product of the lost world which he remembered.
Posted by Mark English at 6:53 PM