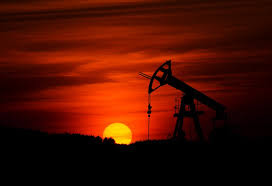 Human civilization was built in part on the exploitation of stored energy. Post-World War 2 Western prosperity was built largely on oil, which is a remarkably concentrated energy source. The energy stored in one barrel of oil is said to represent 4.5 man-years of work.

But strange things are happening in the oil market. And, according to Art Berman, they portend drastic and irrevocable social and economic change.

Prices have collapsed and storage is nearly full. The only option for many producers is to shut in their wells. That means no income. Most have considerable debt so bankruptcy is next.

Most people, policy makers and economists are energy blind and cannot, therefore, fully grasp the gravity or the consequences of what is happening.

Energy is the economy and oil is the most important and productive portion of energy. U.S. oil consumption is at its lowest level since 1971 […] As goes oil, so goes the economy: down.

Oil production and price are unlikely to regain late 2018 levels.

So supply will fall; and Berman doubts that there will be a recovery in demand in the third quarter, even if businesses continue to reopen.

That is because we are in a global depression. Unemployment will remain high and consumers will be damaged from lack of income over the months of quarantine. The truth is that I doubt that demand will ever recover.

At best, economies will re-start slowly and fitfully.

Those who see an opportunity for renewable energy in the demise of oil need to think again. The manufacture of solar panels, wind turbines and electric cars depend on diesel all along the supply chain from extraction to distribution of finished products. A world in economic depression will default to the cheapest and most productive fuels. Oil will be cheap and abundant for a long time. There will be little money or appetite for the massive equipment changes that renewable sources require. Climate change will not be high in the consciousness of people struggling to survive.

Berman notes that prominent economist Lawrence Summers has concerns that the U.S. financial system may collapse because of cascading defaults in the real estate and other sectors. (A quarter of renters and mortgage holders failed to make payments in April.)

He also cites Joseph Stiglitz who believes that the current pandemic will affect the developing world more severely than it has developed countries, and that this could lead to mass migrations even more significant than those we have witnessed (out of the Middle East and Africa, for example) in recent years.

But Berman’s area of expertise is the oil market. He is saying that high-cost producers will fail.

Large segments of the U.S. oil industry will have to be nationalized before the year is over. The price of oil is too low to justify the cost of extraction even if storage were available. The value of a barrel of oil, however, is 4.5 man-years of work and that productivity multiplier will be essential if the U.S. economy is to avoid collapse or for it to recover if collapse is unavoidable.

The economy will continue to be dependent on oil. But the game is over for most of the U.S. oil industry. As he puts it, “someone else’s oil will be cheap to buy for years.”

Berman concludes on a philosophical note:

There are few moments when we may truly say that things are different now. This is one of those moments. We do not know what awful form the future may take, what rough beast slouches toward Bethlehem to be born. […]

I hope that we learn to view what is happening as a chance to simplify and to learn to be satisfied with no more than what we need. It is unlikely that we will have much choice.

Posted by Mark English at 1:15 AM No comments: