A few thoughts on culture, religion and Jewish identity 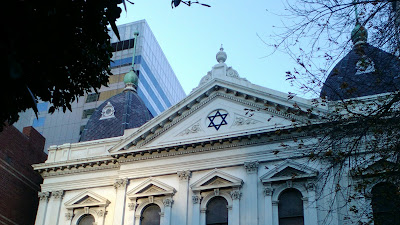 So much talk about religion is empty of substantive content or tediously partisan, mere apologetics. I try to avoid the subject myself as far as I can. But religious practices and beliefs constitute an important aspect of culture and so can’t entirely be ignored, even by those who count themselves as non-religious.

There is also the psychological angle: despite individual differences, it’s clear that our brains are wired for religion or something like it. Why else would secular and even atheistic social and political movements exhibit so many similarities to religious sects and cults?

In a recent piece at The Electric Agora, Daniel Kaufman summarized his skeptical views on God and the supernatural and wondered why it is that so many are still drawn to religious belief.

"By now," he begins, "most readers know that I am an atheist, as I do not believe in the existence of God or anything supernatural. Readers also likely know that I am Jewish by lineage and culturally and that I think God is useless both as an explanation and as a moral exemplar."

It was his social and cultural observations rather than the philosophical reflections which interested me. This, for instance:

"When I first moved to the Bible Belt, I was surprised by the level of confidence people had in their particular brand of evangelical or Pentecostal Christianity (some of them brands I’d never even heard of until that point) and used to think that the best thing for them would be to live in a Lubavitch or Satmar community for a few weeks, where it would become quickly evident that there were people far more religiously committed and more rigorous in their religious lifestyles than they are."

Chabad-Lubavitch and Satmar are rival Brooklyn-based Hasidic sects originating in Russia and Hungary respectively. They differ, amongst other things, in terms of their attitudes to outreach and proselytizing within the wider Jewish community [Chabad is active in such activity but Satmar is not]; and in their attitudes to Zionism and the state of Israel [Satmar remains staunchly anti-Zionist].

Unlike these Jewish groups, evangelicals and Pentecostals profess and proclaim (in Kaufman’s words) their own “extraordinary and intense religious faith” whilst behaving in other respects “pretty much like everyone else.”

Dan talks about the “self-deception” or “psychic indolence” involved in seeing ancient religious texts as embodying eternal truths “about the nature and operation of the universe and everything and everyone in it” rather than in more realistic terms. He himself sees sacred texts as “fascinating and often lurid elements from the eclectic, messy, often ugly history of human development.”

US fundamentalist Christians are a group concerning which I have only limited knowledge. Two things are clear, however: they are are less regimented than Jewish ultra-Orthodox or extremist Islamic groups; and most of the individuals involved embrace large chunks of modernity in their thinking and in their day-to-day lives.

Mixing faith-based and modern views involves inconsistencies but compartmentalization of one kind or another is a universal feature of our brains. Some of the greatest scientists bracketed out their religious beliefs in rather crude ways or aligned themselves with extreme and anti-rational ideologies or political movements. Though most of us manage to avoid such extremes, the logical aspect of our thinking is always in an awkward or ambiguous relationship with more emotional aspects of thought – including those that relate to existential anxieties, to attachments and aversions, to religion, politics, self-image and identity.

In the linked piece, Dan explicitly acknowledges and embraces his Jewish lineage as well as the essentially secular Jewish culture in which he was raised. For his parents – and for himself, apparently – ancestral religious practices continued to be meaningful in the absence of belief.

There is a tension here which revolves, I think, around the purported centrality of specifically religious ideas and practices to Jewish identity. When scriptures lose their special status and come to be seen solely in historical or literary terms, when prayers and rituals are no longer expressions of religious experience but mere nostalgic forms or reassuring customs, they gradually but inexorably lose their power to command attention and motivate religious practice. They become museum pieces. They die.

Is this a problem?

My preference is to see group affiliations in personal and individual terms, that is in terms of sets of shared and overlapping cultural elements and personal values. To the extent that Jewishness is seen this way (i.e. as an evolving element within various disparate cultures rather than in terms of direct links with an ancient, Hebrew-speaking population and the religious practices and beliefs of that population), existential questions about cultural survival simply will not arise.